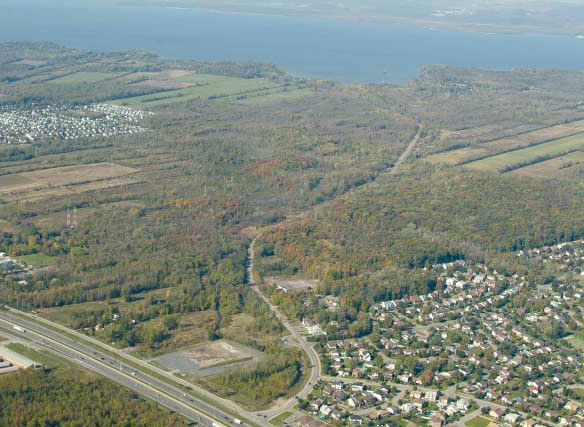 This photograph is of the Rivière à l'Orme ecoterritory on the islands' west end. The Rivière à l'Orme road which zig-zags through this expanse of mixed forest, meadow and wetland, intersects with the Trans-Canada Highway towards the bottom left of the image. At the top of the image is the Lake of Two Mountains. 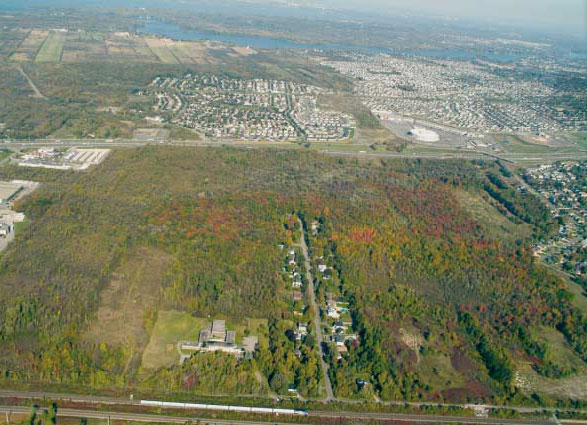 Angell Woods lies to the south of Rivière à l'Orme and between the Highways 40 and 20 (a portion of Highway 20 can be seen along the bottom edge of the photo). This area is bordered on the west side by an industrial park and on the east by housing projects built on the former Fresh Meadows Golf Course.

This is an exceptional forest ecosystem (EFE), with pockets of wetlands. It contain a variety of hardwood tree species, some of which are over one hundred years old, such as Maples (Acer), Hickories (Carya), Birch (Betula), Cedar (Cedrus ), Oak (Quercus) and Ash (Fraxinus). Noteable examples of wildlife known to inhabit the area include endangered species of raptors and reptiles such as the Red-Shouldered Hawk (Buteo lineatus), Cooper’s Hawk (Accipiter cooperii) and the Brown Snake (Storeria dekayi dekayi). The forest, clearings, and other green spaces associated with this area total approximately 100 hectares (250 acres) and cover more than one third of a square mile.

There is a well maintained network of trails open to the public all year round. Visit The Association for the Protection of Angell Woods (APAW) web site to learn more of the largest unprotected contiguous woodgrove on the Island of Montreal. 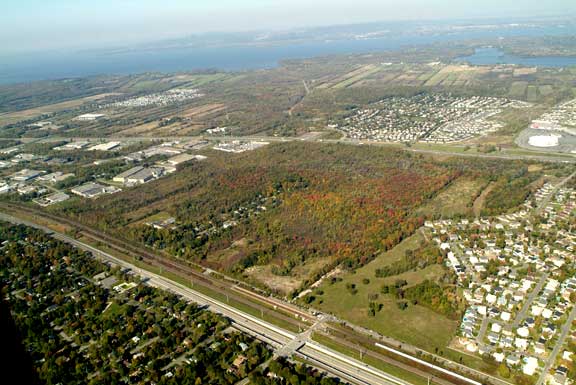 The spatial relationship between the Anse à l'Orme ecoterritory and Bois Angell can be observed in this oblique view of the West Island. In the past, wildlife like the fox may have moved unimpeaded across the Island. Then new roads were built and older roads were expanded to accomodate new human habitats. The roads cutting through these two ecoterritories have ultimately reduced the overall range an animal can travel. Perhaps this was once the corridor for their movement, however at present, the corridor has become the entire ecosystem.

back to main page.